Excellent news for tourists visiting Jávea – the beach bars are staying and might even be able to expand. Similarly restaurants and bars near the sea on other beaches of Javea, such as the Porticholl beach restaurant, the port promenade bars and many more may be able to get a permanent license to please and help entertain visitors to Javea with drinks and meals right by the sea.

The Chiringuitos, Jávea beach bars, have been under threat from the Spanish “Law Of The Coasts”, that is intended to protect the beauty of the coastline from deteriorating under the pressure of commercial use. However, the law has also had highly unfortunate side effects as in principle it rendered popular tourist spots such as the promenade service on the port and the beach bars on the strip between the Arenal Beach and The Port, Duanes Al Mar, illegal. 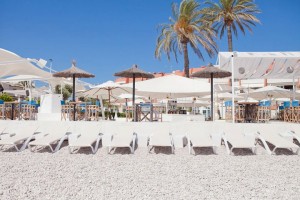 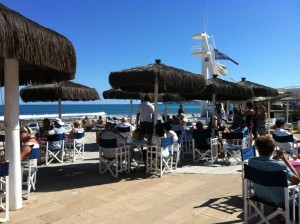 In Jávea, the enforcement of the law (Ley De La Costa) has been carried out with a rather relaxed and pragmatic approach over the years. The beach bars have been allowed to exist whilst taking liberties well beyond the letter of the law but very much to the joy of tourists and residents alike. Similarly several other restaurants and bars have had dining arrangements in areas that weren´t allowed, one example being the tables and chairs on the sea side of the promenade on the Port.

Now, the new law appears to be a more flexible version of the old one. Fundamentally the law now recognises tourism as a main priority for Spain and allows for local zoning of tourist areas that may get general dispensations from the regulations, requirements for distance from the sea etc. 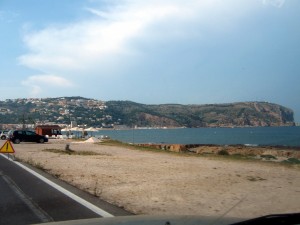 The Jávea chiringuitos are in one such obvious tourist zone. The much beloved beach bars such as La Siesta, Montgo di Bongo, Mintt, Moskito and Full Moon are seemingly exactly what the law seeks to protect as valuable tourist attractions on the beach that cause no harm to the beauty of the coastline or the nature of Spain. Given the old law was not yet enforced against the chiringuitos in Jávea, it is obvious that a tourist zone is likely to be authorised on the strip between Jávea Port and the Arena.l

The Jávea council is apparently already working on changing the rules for the chiringuitos, so that they will no longer have to pay fines repeatedly for breaking the rules, but will in fact instead be secured for the future, with a strong possibility that the Chiringuitos will be given permission to renew their licences. 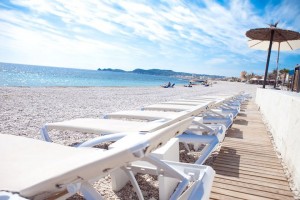 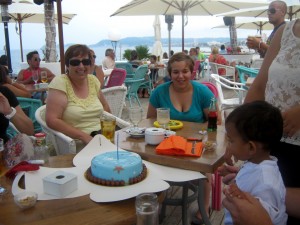 In theory it is probably possible to allow the tables and chairs back on the port promenade as well to the joy of residents and tourists alike, all it requires is a zoning and potentially a rental fee from the restaurants.

This is all good news for tourists and seasonal busnesses in Jávea. The danger of the beach bars being limited or closed seems over. It is time to head down and enjoy some pleasant drinks in the afternoon sun with the crystal clear waters of the Mediterranean at your feet.